Connecting Struggles Across Issues and Borders 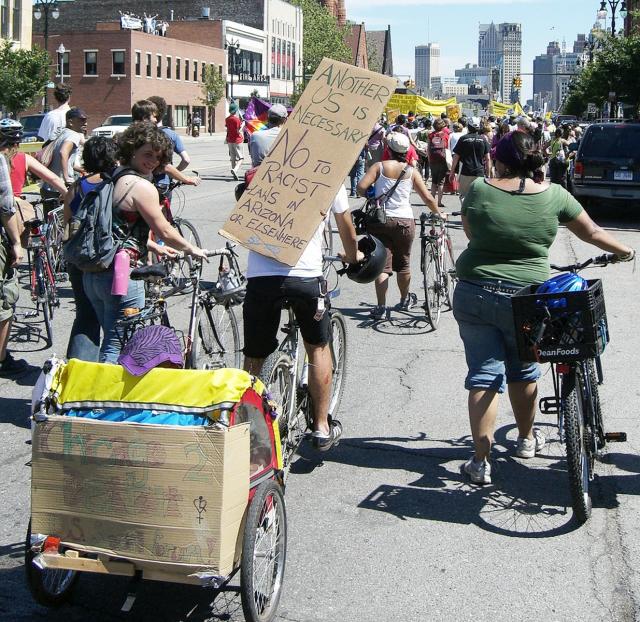 The roots of the environmental justice movement lie in an archetypical struggle between low-income communities of color and industrial polluters—refineries, incinerators, landfills, and dirty ports, to name a few. In the last few years, leaders of this movement have worked ardently to infuse an environmental politic into racial and economic justice campaigns and to underscore local control of common resources and community-based solutions to social and ecological ills.[1]

Now the fruits of this labor are becoming evident. What was seen as isolated pockets of noxious industrial impacts are now being viewed as symptoms of larger phenomena that create other social inequities. People are connecting the impacts of toxic industry to other injustices, such as forced migration and poverty jobs, and coming together to address these multiple crises.

On a hot July afternoon in Detroit last summer, over 300 movement organizers from across the United States gathered to plot a course for ecological justice as part of the U.S. Social Forum. “We come from environmental justice communities who have been on the frontlines of the effects of polluting industries like waste incineration. But [we] also come from economic justice struggles... and immigrant [communities that] understand the connection between land and life,” said Michelle Mascarenhas-Swan, strategy initiatives director for Movement Generation based in Oakland, California.

The gathering was an important moment in cohering movements across different sectors in the United States to deal with the root causes of all struggles. Foremost on everyone’s mind was the connection between environmental health, forced migrations, and the recent Gulf Oil disaster. What do the three things have in common? The economy.

Pitching Jobs against Lives
The tradeoff facing working class communities between environmental and ecological health and sub-par jobs has become starker in this recession.Panelist Roland Wall pointed out that he lives in the most polluted zip code in America, but the concerns of Detroit residents have been routinely brushed aside by city and state officials because jobs are considered more important than health. Recounting his experience in Louisiana right after Katrina, he noted that the air force base had people from Mexico, Nicaragua, and other places that were part of the guest worker program, doing cleanup without masks. “They were putting up blue tarps on roofs for Halliburton—which charged $1800 a piece for the tarps—and being paid less than minimum wage.” Jose Brava of the Just Transitions Alliance in San Diego pointed out that having an incinerator is not the same as having a job. “You can paint the incinerator as green as you want, but it will never be a green process.”

Environmental Devastation Forces Migration
The worsening environment in Mexico has resulted in the dislocation of vast numbers of people who are forced to take actions and jobs that are, in effect, life-threatening. Addressing the interrelationship between environmental and social justice movements, Carlos Marentes from the Border Agricultural Workers Project, said:

“When we began to organize [migrant farm workers], the farmers were our enemies. [They were] the ones exploiting us and paying us low salaries. We also saw American consumers as [our enemies] demanding cheap food… But over the years we started to learn how the agricultural system works. We learned that the farmers, the producers, the consumers, all of us were victims of the North American commercial agricultural system.”
The industrial agricultural system of production in the United States is based on the exploitation of migrant farm workers in the fields and the displacement of small producers off their land. Its purpose is to create profits and wealth that is concentrated in a few hands. Two hundred corporations control the food system of the world, of which a third are U.S. based.

“Today, eight out of 10 farm workers in the U.S. are from Mexico,” Marentes pointed out. “Campesinos displaced from their communities, who are forced to cross the border, to risk their lives in order to survive.”

The program director for the Gulf Coast Fellowship for Community Transformation, Colette Pichon Battle agreed that the debate about immigration is really a debate about displacement. And it is not just an issue for the global south.[2]

“After a painful five years people have just rebuilt and started [to] come back... now we’re being displaced again,” she said. “It’s happening in the Gulf Coast because of oil, because of industry. It’s time for us to stand up and stop what is happening.”

Livelihoods vs. Environmental Disasters
The recent BP oil spill highlights how negligent business practices can cause massive shocks to people’s jobs and loss of life. There has been a wetland loss the size of Rhode Island in the Gulf with wetlands being destroyed by development and fossil fuel exploration even before the BP disaster.

According to Jon Hueng, a youth organizer in the Gulf’s Vietnamese community, 80 percent of the 40,000 Vietnamese Americans living in the area used to survive by fishing, which they have not been able to do since the oil spill.

“BP pays up to $500 per month, which is not enough when you have families to feed, boat loans to repay, and housing debt,” Hueng said. “There is also a serious problem of risk to mental health, including depression and suicides [among] people who can’t work anymore.”

Jamie Billiot, a representative of the 17,000 indigenous members of the United Houma Nation who have lived and fished in the marshes of Louisiana for many generations, said: “We are forced to work for BP and ExxonMobil. We have to force these companies to take responsibility for the damage they are doing.”

There is little doubt that the many years of dredging in the wetlands by the oil industry has made Louisiana vulnerable to hurricanes, says Battle. “These storms—Katrina, Rita, Gustav, Ike—that hit us all in the last five years caused so much damage because wetlands have been absolutely decimated.”

Marentes gave voice to the real challenge facing the Gulf and the movement at large when he said: “To deal with climate change, we need to deal with the system. It’s not only about imposing million dollar fines or putting CEOs in jail. We should do that, but it will not bring back the oil rig workers who died or the life that has disappeared in the Gulf because of this tragedy. We need to replace [the entire] destructive system because our lives are in danger and Mother Earth cannot take it anymore.”

A Call to Coordinated Action
Alejandro Villamar of the Mexican Network for Action against Free Trade made a strong argument for transnational solidarity in the wake of cooperative international agreements like NAFTA that have no enforceable labor or environmental statutes. It has become quite clear that free trade agreements have caused grave deterioration of the environment, of communities, and their health all across Mexico, especially in rural and industrial areas.

“My brothers and sisters in Detroit sometimes complain about the dirty jobs that were exported,” said Villamar. “Back home, we complain about the dirty jobs and exploitative labor practices that were brought to us! What is becoming incredibly clear is that we need international solidarity from the south to the north in direct response to this faulty model that is wreaking havoc.”

The first step toward a cross-issue and cross-border approach was taken in Detroit when leaders collectively planned mobilizations against Arizona’s SB 1070, actions to commemorate the fifth anniversary of Hurricane Katrina, and strategies to push proposals on ecological justice from last April’s Climate Conference in Cochabamba, Bolivia. But they also emphasized the need to empower locals to have more control over their environmental and economic destinies. “If you give the land back to land-based people, they will fix the problems,” observed Jamie Biliat, executive director of the Dulac Community Center.

Since the meeting in July, communities have been crossing borders and issue lines to stand together in solidarity. Folks from the Gulf Coast participated in an immigration action in Arizona to show that the struggle against big oil is the same as the struggle to allow people to move freely. With climate talks in Cancun planned for this December, various groups are committed to building a grassroots cross-issue analysis of what needs to be done to compel the U.S. government to radically change its fossil fuel-based economy and start paying its ecological debt.
“Resistance is key, but resilience is also key,” says Mascarenhas-Swan. “We want to build communities that can work in cooperation with one another, restore our relationship to place, and shift out of this me-based way of living.”

To order the print edition of "The Weaving the Threads Issue" use the back issues page. To download or view a pdf of this article use the link in the lower left below. 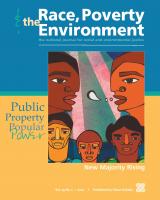 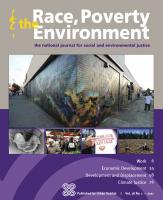 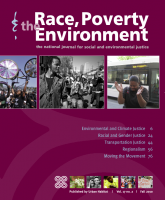 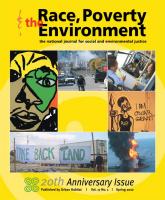 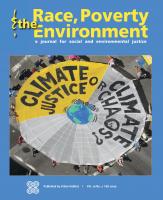 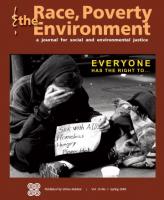 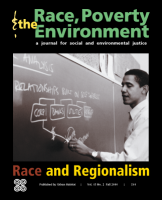 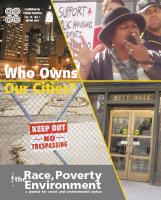 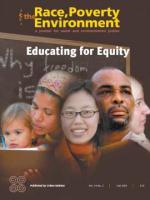 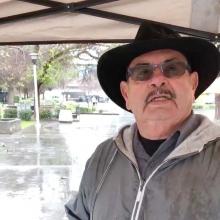 As the South Goes; Organizing, Healing and Resilience in Gulf Coast Communities 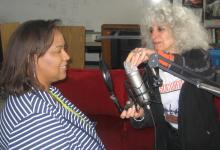 “We need folks to value our difference and to value our uniqueness and to say that there just might be something as innovative as jazz to come out and solve this climate change problem.”