Discrimination and Disparity in the Food Service Sector 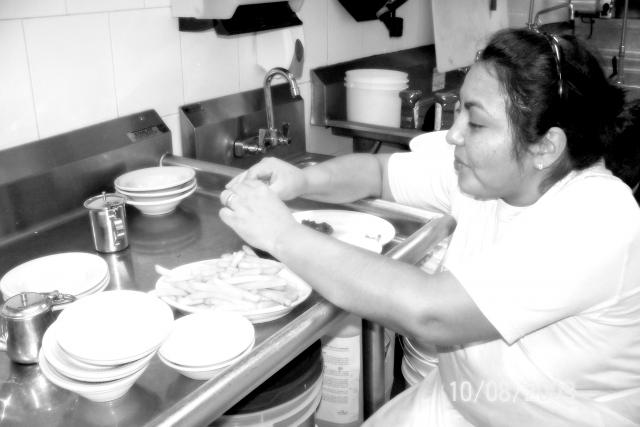 Walk into any fine-dining restaurant in an American urban center and you will observe: white workers serving and bartending; workers of color clearing tables, preparing food, and washing dishes.

Like the segregated buses of the Jim Crow South, the restaurant industry has reserved the best jobs in the front for whites, while workers of color are relegated to the back (unless they are bussing tables in the front). Both restaurant workers and employers admit that this stark divide along color lines is commonly accepted industry practice based on notions of skills, table manners, language ability, and appearance. Thanks to a legal framework that demands proof of discriminatory intent, this obvious form of segregation has existed mostly unchallenged until recently.

With over 10 million employees, the restaurant industry is the nation’s second largest private sector employer—just behind retail—and the largest part of the nation’s food system. The industry continues to grow rapidly, even as other sectors decline during the current economic crisis, and is considered a gateway of opportunity for immigrants and low-wage workers of color from all over the world. However, research shows that in the country’s largest urban areas, only about 20 percent of all restaurant industry jobs provide living wages and benefits. (There are some instances of waiters and bartenders at fine-dining places in urban centers earning between $50,000 and $150,000 annually.)

With less than .01 percent union density nationwide, the industry mostly provides low- and poverty-wage jobs with little access to benefits. In 2010, the median hourly wage for restaurant workers nationwide was $8.86, which means that over half of all restaurant workers earned less than the poverty wage of $8.90 for a family of three. Also, according to the Bureau of Labor Statistics, the three lowest-paid occupations in America in 2009 were to be found in the restaurant industry.

ROC: A Worker Union Born of Tragedy
In April 2002, the Restaurant Opportunities Center (ROC) was founded in New York, to provide support to restaurant workers displaced from the World Trade Center by the events of September 11. ROC has since grown to include over 7000 members in eight localities nationwide and engages in workplace justice campaigns, cooperative restaurant development, organizing of responsible employer partners, and participatory research and policy work at the local and federal levels.

From 4,323 surveys of restaurant workers nationwide and over 240 employer interviews, ROC has concluded that workers of color in the restaurant industry are subject to a minimum of $3 wage differential (or “race tax”) from their white counterparts. In every urban area that ROC studied, workers of color were segregated by segment (overrepresented in fast food restaurants and underrepresented in fine-dining) and by position (overrepresented “behind the kitchen door” or relegated to busser and runner positions in the front), which essentially kept them in lower-paying jobs with less access to benefits.

In a study conducted from 2006-09, ROC discovered that of the 200 pairs of job applicants (white and people of color) they sent to fine-dining restaurants, white workers were twice as likely to obtain living-wage positions. Even holding accent constant, people of color were questioned about their qualifications at three times the rate of white workers. ROC also found that a strong European accent (even if incomprehensible) was an advantage to obtaining one of these living-wage positions, whereas a Third World accent was a serious detriment. 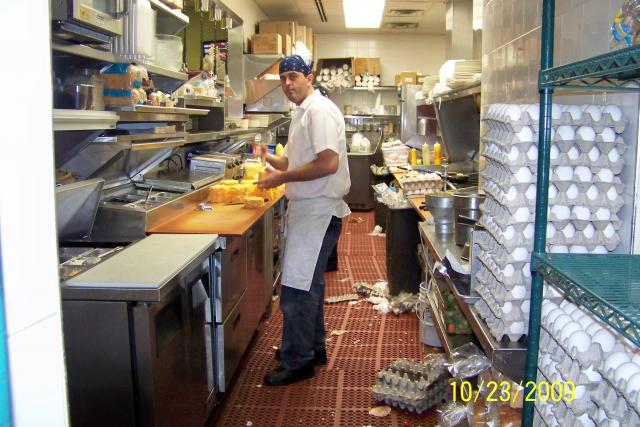 Perhaps the most insidious finding of all in ROC’s nationwide study was that segregation is fully expected and accepted in the industry. Interviews with hundreds of employers and workers revealed that both groups found it completely natural that white workers were almost always found in the highest-paid positions. Employers and several white workers agreed that workers of color lacked the skills, “table talk” (the ability to converse easily and relate to a wealthy white clientele), and/or appearance to succeed as fine-dining waiters and bartenders. Interviews with workers of color, however, revealed that many were training less-experienced white workers who then immediately surpassed them into waitstaff and bartending positions that paid up to five times more than what they were earning as bussers.

Restaurant Daniel: ROC’s First Victory
In 2005, several Latino and Bangladeshi runners and bussers from Restaurant Daniel, New York City’s only four-star restaurant, approached ROC with the complaint that they had been repeatedly passed over for promotion to wait staff and bartenders by inexperienced white workers. The difference in salary was literally five times greater—bussers and runners earn between $20-$30,000, whereas waiters and bartenders can earn around $150,000 annually.

Following a large-scale public campaign and litigation in federal court, which  resulted in a two-page cover story in the Dining Section of the New York Times, Restaurant Daniel moved to promote several of the bussers and runners. Most importantly, the restaurant developed a new promotions policy monitored by the Equal Employment Opportunities Commission (EEOC), which compelled management to inform all workers of new openings and to provide training that would allow workers to advance into these positions. This came as a result of a key finding about the lack of transparency with regard to job openings. Workers of color rarely knew about potential opportunities for training or promotion to jobs for which white workers were hired from the outside.

In essence, the lack of formalized career ladders makes it possible for restaurant employers to use such dubious criteria for hiring and promotion as “table talk” and appearance, which is thinly disguised racial bias. The frequently cited language ability and accent criteria were shown to be patently false in the Restaurant Daniel case, in which many inexperienced new French immigrants were almost immediately placed on the dining floor as waiters.

Color/Gender Segregation: A Nationwide Malaise
When ROC replicated its study in urban areas around the country, it discovered that segregation and discrimination in hiring and promotion was quite commonplace. In Miami, for example, segregation along skin color lines is very obvious—even more than along race or ethnicity. Whites and light-skinned Latinos typically serve and bartend, while darker-skinned Latinos are more likely to be bussing and running food to tables, or preparing food in the kitchen along with African Americans. Haitians, the darkest, poorest, and most vulnerable population in Miami, are almost always the dishwashers—the lowest-paid position in the restaurant. The segregation is further confirmed by wage differentials unearthed by ROC’s nearly 600 surveys of restaurant workers in Miami-Dade County: the reported median wage was $11.29 for whites, $10.00 for Latinos, $9.00 for non-Haitian Blacks, and $8.21 for Haitians.

Also, ROC found the segregation and disparity even greater for women of color who face the double oppression of race and gender discrimination in a very male-dominated sector. In every city surveyed, women of color were more heavily concentrated in fast food restaurants than the overall survey population, and in most cities they suffered a $5 median wage differential (race and gender tax) from the overall survey population.

In several locations, racial segregation by segment and position was further compounded by geographical segregation. For example, in the Detroit metropolitan region, low-wage workers of color must commute long distances with little or no access to public transportation for living-wage jobs in the suburbs where they face tremendous discrimination. One restaurant worker in Detroit claimed that applying for a job at a fine-dining restaurant in Troy, a suburb of Detroit, elicited the query: “You’re not planning on eating here, are you?” She was also told that the restaurant had never hired an African American in its 10-year history.

ROC’s Ongoing Campaign
ROC has taken the following steps to address racial segregation and discrimination in the restaurant industry:

Moving Forward: The Two-Pronged Approach
Even if racial bias were to vanish entirely from the restaurant industry, it would be impossible for most workers of color to earn a living wage, primarily because only about 20 percent of all available jobs pay that much. So the fight for equal opportunity has to happen in tandem with the fight for a living wage. And until we confront these social and economic disparities, all Americans will continue to suffer the moral, economic, and public health consequences of a segregated food service industry.

Saru Jayaraman is co-founder of the Restaurant Opportunities Center United (ROC-United) and Assistant Professor of Public Law in the Department of Political Science at Brooklyn College.

To order the print edition of "Globalization Comes Home Issue" use the back issues page. To download or view a pdf of this article use the link in the lower left below.