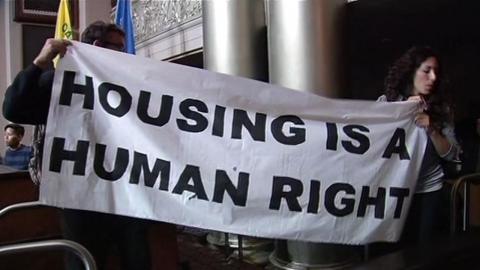 One of the more visible signs of the growing income inequality in Oakland is the sprawling encampments of homeless people building tents and other shelters to escape this year’s rains. Not surprisingly, most of those who are homeless in Oakland are African American, and sadly, it’s also not surprising that this is a direct outgrowth of city policy.

In 2013, then Mayor Jean Quan riled many African Americans by telling Atlantic Magazine that Oakland’s reputation as a Black city was a liability to marketing it. In her paraphrased comments, she appeared to promote a “new” Oakland with fewer African-Americans.[1]

Unfortunately, Quan was simply following through on policies put in play by former mayor Jerry Brown (1999-2007). Brown’s 10K plan to bring market-rate housing and entertainment options to downtown Oakland and his close alliances with developers like Forrest City and Phil Tagami[2] set the stage for today’s massive dislocation. The new residents would overshadow and eclipse the existing, mostly African American, residents and make them disappear. Mayor Ron Dellums (2007-11) did nothing to reverse those trends, often shying away from using the “b-word” (Black) in public speeches. [3]

Today, the City of Oakland’s official website (www2.oaklandnet.com) boasts national articles on the “new” Oakland, none of them featuring Oakland’s rich African American people or culture. WalletHub celebrated Oakland as the second most ethno-racially diverse city without addressing the African American’s recent history of displacement that created that new diversity.[4] Business Insider called Oakland “the new hipster hotspot in the Bay Area.” It included a picture of white, not African American, hipsters.[5] Jetsetter listed Oakland as one of its 10 best food cities. They mentioned none of Oakland’s soul food restaurants that had been in the city for years.[6]

In the “new” Oakland, more and more landlords stopped renting to Section 8 tenants, many of whom were African American. Some landlords even evicted their Section 8 tenants by not renewing their contracts. African Americans on Section 8 had fewer opportunities to relocate in Oakland. I know of at least one Oakland native who had to move to a homeless shelter in Richmond because he couldn’t find a new place that accepted Section 8. In contrast, a white man told me that he had relocated from the east coast to the Peninsula. He had mentioned in a casual conversation to a friend that he heard West Oakland was “cool.” He wasn’t looking for an apartment, but he soon got an unsolicited phone call from a landlord offering him an apartment in West Oakland. New residents have also filed noise complaints with the city, attempting to shut down drumming in public, and even some Black churches that had been in Oakland for generations.[7]

“New” Oakland’s Refugee Camps
In 2015, Oakland produced a report showing that in the “new” Oakland, the African American population plummeted between 2000 and 2010. In contrast, white, Latino and Asian populations increased (p. 8).[8] According to the report, “not all displaced Oaklanders can relocate to other communities and, instead, some remain homeless in Oakland, living on the streets and in emergency shelters for months, even years” (p. 7). The report even added, “a recent study found that 41 percent of homeless individuals surveyed in Oakland became homeless after the age of 50 years—with skyrocketing housing prices and the loss of safety nets to blame.”

Many of the homeless settled in illegal encampments that resemble refugee camps. The encampments are very visible and obvious. Some people hide and sleep among trash in tents and on sleeping bags on the cold dirt or concrete sidewalk. Some people hide and sleep under tarps either on the ground or on benches. While the people settled in the encampments try to keep their spaces clean, outsiders come to illegally dump trash there. People living in the encampments see rodents. Encampments are often under noisy, dusty freeways. Some live on dirt that turns to mud in the rain; passing cars splash water on them. Police and other city workers harass the people living there.[9] Most of the people in the encampments I’ve visited have been African American. Some I knew from years ago. (See Miss Raynel’s Shanty, p: 44)

“New” Oakland Treats Animals Better Than People
Near the encampments I’ve visited are several businesses catering to pampered pets. This “new” Oakland dehumanizes the people in the encampments while humanizing pets and treating them like spoiled children.

Happy Hound Play and Daycare is near an encampment in a dusty, dirty industrial part of West Oakland. It’s a doggy play, daycare and spa. According to its brochure, it offers super-suite boarding, pedicures and manicures, and “overnight cuddle time.” Sitters monitor the play area which includes colorful equipment for dogs to climb and jump.

Just Pet Me in downtown Oakland is near another encampment. It calls itself a pet “country club” with “doggy daycare, pet hotel and spa.” The brochure states that dogs can play in an “engaging environment” all day. When the dogs want to sleep, they can sleep in the hotel and “reminisce about their friends.” Cats can enjoy a “private immaculate condo.” Another site promises “secure indoor” and “safe drop-off and pick-up.”

Cat Town, also located downtown near another encampment, states that it’s “helping Oakland’s vulnerable cats.” It advertises that “through foster care and adoption, Cat Town finds homes for at-risk cats who are struggling in the animal shelter environment [. . .] Help us save some of Oakland’s most distressed cats and kittens.” Such wording for cats seems to mock, dehumanize and trivialize Oakland’s homeless, at-risk youth and is either clueless or insensitive. On the front door, its kitty cat café claims to be the first of its kind in the US. Does this make Oakland the first city to be so dehumanizing?

Treating animals like people is cartoonish and infantile. Yet, the City of Oakland website brags that Trulia ranked it No. 4 among most pet-friendly rental markets.[10]

Can Oakland Fix the Homeless Crisis It Created?
While the city official website touted accolades for the “new” Oakland in the national media, homeless encampments popped up throughout downtown. This should have raised a red flag for city officials that Oakland was in a shelter crisis. According to state law, declaring a shelter crisis means that a city proclaims that a significant number of its residents have no ability to obtain shelter, which results in a threat to their health and safety.[11] In theory, declaring the crisis frees the city to take immediate action to address it. For example, the city can designate public property a temporary shelter without bureaucratic entanglements.

In January 2016, the Oakland City Council finally declared a shelter crisis in Oakland but it was merely symbolic because there was no immediate or decisive action taken to address the crisis.[12] Instead, the City Council handled the “crisis” with debates, stalemates, bureaucracy, more meetings, and reports. It voted to open the Lake Merritt Garden Center as a temporary shelter within 15 days but did nothing about it. The “new” Oakland did not respond to homelessness as an emergency. A little more money would be added to the City’s existing, but obviously inadequate, homeless program. A few beds, not enough to impact the crisis, were temporarily added to shelters. But the Council did vote to include the shelter crisis as a regular agenda item for its meetings!

Meanwhile, between these Council discussions of the “crisis” in January 2016, Oakland was hit by a rainstorm and strong winds that blew away the tents and tiny houses of people living in a homeless encampment, exposing them to the cold rain, standing water and mud.

Fortunately, the City did stop the harassment of people living in encampments.

At one of the Council meetings in January, several homeless people spoke, making these abstract discussions real. Everyone at the meeting finally seemed to realize that Oakland really had a crisis and that homeless people were real and had the right to be heard.

One homeless African American man, born and raised in Oakland, told the Council: “Oakland puts more emphasis on gentrification than the people who live here. They’re trying to give Oakland some new identity.” He’s right. Removing him—a homeless African American—was very much a part of the creation of the “new” Oakland. Can he change that by exercising his right to vote?

Kheven LaGrone is an Oakland-based writer and artist.