On August 10, 2017, Blackstone group announced that is merging its Invitation Homes subsidiary with another huge corporate landlord, Starwood Waypoint. The combined corporation, will own over 82,000 single family homes. Added to the  114,000 multi-unit apartments it already holds,  Blackstone will become far and away the largest US corporate landlord.

This is bad news for low-and middle income renters for three main reasons:. Big corporate landlords rely on eviction to obtain and to manage their properties, complaints of shoddy remodeling, non-existent maintenance and botched repairs of both Blackstone and Starwood Waypoint owned properties are ubiquitous.  and rent increases in the corporate-owned real estate market are consistently higher than in comparable units in the same market .

Tenant and consumer groups have decried the merger. In California, where corporate ownership has reach epidemic proportions Tenants Together and Alliance of Californians  for Community Empowerment  (ACCE) point to Starwood’s terrible track record of rent increases and shoddy maintenance.  In a press release from the group, ACCE member Vanessa Buines says “Not only is Starwood Waypoint forcing us to live in inhumane housing conditions its displacing families in droves.”

Homes For All, a national network with tenant groups in over 30 cities has repeatedly warned that if left unchecked, Wall Street-backed corporate landlords could spark another real estate crisis as in 2008. (See for example the Right to the City Report The Rise of the Corporate Landlord).

Not surprisingly, Blackstone CEO Steve Schwarzman is a Trump administration business buddy whose real estate empire was given a boost in the first week of the Trump Administration when Fannie Mae loaned it  $1 billion and HUD reversed an Obama administration regulation that would have made it easier for first time home-buyers to get Federal Housing Administration mortgage insurance and harder for corporate landlords to convert the houses to rentals.

(Schwarzman was in the news again when as chairman of the business advisors group from which other CEOs resigned in protest, he defended Trumps claim that violence in Charlottesville came from many sides.)

The loan from Fannie Mae gave Invitation Homes a capital infusion at a crucial moment.  The corporation went public with an initial public offering (IPO) underwritten by Deutsche Bank and JP Morgan Chase  less than a week later, raising over $1.5 billion. According to industry analysts, backing by a Government Sponsored Enterprises (GSE) like Fannie Mae not only strengthened Blackstone’s IPO position, but sent a signal to the entire single family home sector that the resources and regulations of the federal government will be lowering the risk of investing in this new speculative arena.

In a morning-after interview on CNBC, Barry Sternlicht, Starwood Capital Group chairman & CEO,  bragged that he expects to pull in  65% gross margins,  and make $50 million in cost savings as a result of the merger

The complex financial transactions behind the unprecedented rise of corporate single family home ownership involves an initial bulk purchase of heavily discounted mortgages on hundreds or thousand of homes using hedge fund cash. These homes are then rehabbed, rented and then re-mortgaged. The mortgages are then sold on as securitized bonds, now at a much higher valuation, where the bonds are paid off using tenants monthly rental checks rather than mortgage payments. The similarity to the sub-prime mortgage debacle isn’t coincidental. These are many of the same players who brought about the sub-prime crisis in 2008. 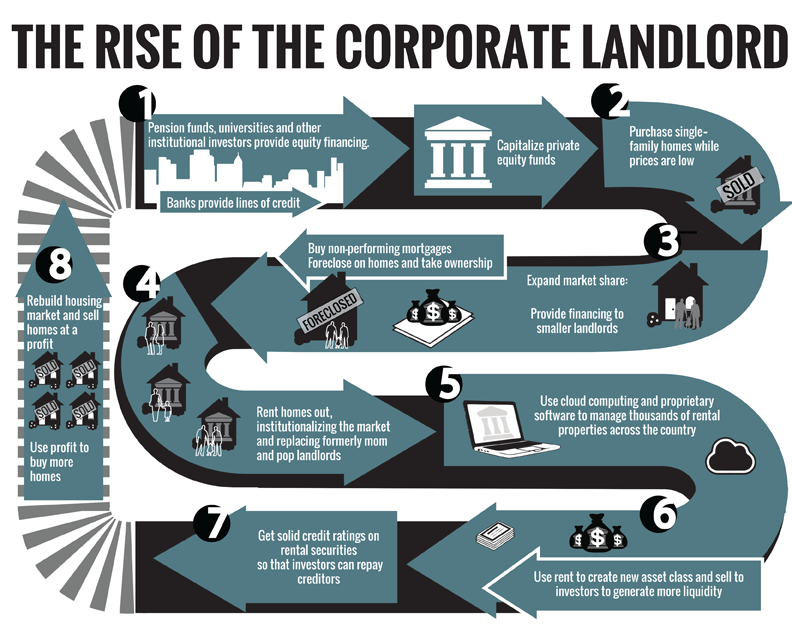 Government Agencies Work for the Regulated Corporations not the Public
Fannie Mae was originally conceived as a way of helping homeowners get credit during the great depression, but now in one of the more brutal instances of industry capture, Fannie Mae is providing the deep pockets for Wall Street corporations to take over yet another ingredient in the basic building blocks of US civil society, the single family home.  Once upon a time, profits from Fannie Mae were supposed to go to the HUD and the proceeds from all these market investments were supposed to provide funds for things like affordable housing.  The Trump-Carson budget cuts will no doubt make an already bad situation worse.

During the great recession an estimated seven million homes went from being owned by their occupants into some form of non-tenant ownership. The big GSEs Fannie Mae and Freddie Mac refused to write down the principal of individual homeowners, instead they offered steep discounts to Wall Street speculators, who then foreclosed on the homeowners.  According to an American Prospect report in 2015, “Fannie and Freddie impose few conditions on the bulk buyers. They neither require them to consider principal reduction in the modification process nor to consider the affordability needs of communities when putting homes on the rental market.” 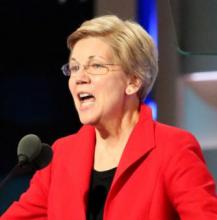 As Senator Elizabeth Warren said when she joined a national protest against the HUD giveaways of these properties  “Many of these banks and funds were responsible for fueling the housing bubble in the first place—leading to the crash that hit these families like a punch to the gut. Now these same banks and funds are turning around and scooping up these loans at bargain-basement rates so they can profit from them a second time.”

The fact that Fannie Mae sold these houses to the banks at sometimes pennies on the dollar (under Obama) and they are now backing Blackstone to turn them into securitized bonds and cash cows shows just how far the regulatory capture of US housing agencies has progressed.  The Federal Finance Housing Agency (FHFA), the supposed regulator of Fannie Mae and Freddie Mac explains on their own website “FHFA 's funding is non-appropriated, which means our budget resources are not provided by Congress. Instead, our funding comes from the entities we regulate.”

Several industry reports point out the Freddie Mac is also about to jump in on backing corporate single family home rentals (aiming for a smaller regional market)  which is a pretty big shift of policy away from the home ownership for two agencies that were established to enable people to buy homes.  For the most part this shift is happening  behind the screen of  the “Trump effect”.  Decisions that  previously were subject to public scrutiny are now being made below the radar. With the mainstream media i swept up in manufactured maelstroms, the normal feedback mechanisms that guide policy change are defeated.

Higher Rents, More Evictions, Slumlord Management Practices
In most of the US rent control doesn’t apply to single family homes so even in areas where tenants have won some local control, big capital can continue to play the boom and bust cycle by turning homes and communities into chips in a casino where the rules are rigged so that the banks and Wall Street win. They reaped billions in the irrational exuberance of the mortgage-backed securities bubble and now they plan to do the same on the backs of the renters and at the expense of our communities.

Beyond the obvious incentive to constantly increase rents to service the bonds, a recent series by Reveal a program of the Center for Investigative Reporting  exposed dozens of cases  of cost cutting on the expense side of the ledger. From dangerous conditions such as lead contamination and fire hazards to mundane problems of bad plumbing and leaky roofs Waypoint properties from California and Florida are awash in complaints of  shoddy rehabs, missed maintenance, and more. A 2015 study by Tenants Together of what were then three separate companies showed that over 40% of tenants had experienced such problems.

Even the Better Business Bureau has open investigations into innumerable instances of stolen security deposits, illegal fees, and false representations to prospective tenants.

And while Blackstone tenants live in homes lacking basics like hot water and toxin-free yards billionaire Schwarzman  owns a 35-room 13-bath Manhattan apartment , as well as mansions in Palm Beach, The Hamptons and St Tropez - and a winter villa in Jamaica.

Starwood Waypoint renter Vanessa Buines managed to hold on to her home thanks to a united community organizing effort and is now a renter’s rights leader helping others to mobilize. In July 2017 tenants organized with Alliance of Californians for Community Empowerment  (ACCE ) occupied a Starwood Capital Group office in San Francisco to deliver a petition with over 1400 signatures to Barry Sternlicht demanding an end to rent increases, which have shot up as much as 13.3% this year.[1]  Anya Svanoe the ACCE communications coordinator says that tenants of Invitation Homes/Starwood in LA,  Oakland and Sacramento are continuing to organize.   She says that the tenants will collectively decide where they will be organizing actions in September to defend “whoever is being screwed at the moment.”

Next month, tenant groups in in California, Atlanta and Boston are organizing actions against corporate landlords in a coordinated week of action across the country.  You can see the growing list of planned actions or sign up to host an event at: http://www.homesforall.org/renterweekofaction.

Jess Clarke is an editor at Race, Poverty and the Environment and Project Director of Reimagine! Movements Making Media.

“Blackstone: Atlanta’s Newest Landlord,” by Occupy Our Homes;
“The New Single-Family Home Renters of California,” by Tenants Together;
“The Rise of the Corporate Landlord,” by the Right to the City Alliance;
“Renting from Wall Street: Blackstone’s Invitation Homes in Los Angeles and Riverside,” by Strategic Actions for a Just Economy;
“REO to Rental in California: Wall Street Investments, Big Bank Financing, and Neighborhood Displacement,” by the California Reinvestment Coalition; and
When Wall Street Buys Main Street,” by the Center for American Progress.

This work is licensed under a Creative Commons Attribution-NonCommercial-NoDerivatives 4.0 International License. You may reprint or repost this article so long as it is attributed as above.